The gala, a lavish evening that also raised money for the Orlando City Foundation, celebrated the second season of Major League Soccer (MLS) and expansion seasons in both the National Women’s Soccer League (NWSL) and the United Soccer League (USL).

This award is presented to the player who best represents the club through social media, traditional media, LionNation, and fan engagement. As part of their award they will be gifted use of Orlando City’s suite at the Amway Center for a sporting event or concert of their choosing.

Volunteer of the Year Award, Presented by Northwestern Mutual

It takes a village to run an Orlando City game. At any given point, you’ll see volunteers on the field for presentations, directing ball managers, in the press box recording game stats and so much more. This year’s Volunteer of the Year showed an exemplary level of dedication to the club and willingness to do whatever it takes to get the job done. This person volunteered at almost every game for Orlando City, Orlando Pride and OCB plus the Copa America tournament – amazing dedication to our club! 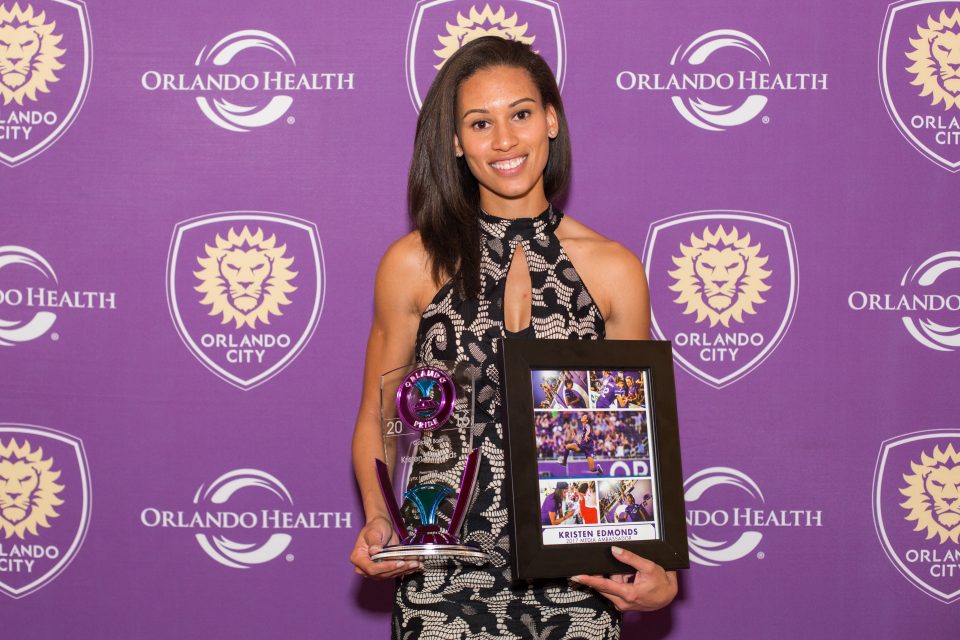 Jorge earns the Volunteer of the Year award for the second consecutive year after once again highlighting with his hard work and dependability across the three teams. Jorge, whose responsibilities range from setup and breakdown of game days to away team liaison, consistently attends matches early and leaves late to provides assistance to the Operations Department. His positive attitude and willingness to not only work hard, but also learn the operation, is unmatched.

Rookie of the Year Award, Presented by Barton Malow

The winner of this award, according to the coaches, adapts to the demands of professional soccer day-in and day-out, steps-up to expectations, physical and mental demands, adverse situations, shows consistency through the long, grinding year, is a leader among rookie players and constantly defies expectations.

Barry, who was selected in the first round of the 2016 MLS SuperDraft, had a spectacular first season as a professional. The former UCF standout had one assist in eight MLS appearances, four of them starts, while also splitting time with Orlando City B, where he had four goals and two assists in 10 games.

Witteman, 22, became the Pride’s first NWSL College Draft pick on Jan. 16 when she was taken in the first round (No. 10 overall) out of Cal State Berkeley. Witteman led all Pride rookies with 16 appearances, 12 starts and 1070 minutes. Throughout her first professional season, Witteman proved to be a versatile asset – playing on the backline, in the midfield and as a forward.

This is award is voted on by the fans. With over 1,600 submissions, it was a close race for the final tallies for both teams. As many know, Orlando City fans and Pride fans are some of the most outspoken and passionate fans in their leagues.

Bendik, in his first year in goal for the Lions, put out one extraordinary performance after another. Bendik has consistently been among the league leaders in saves and took home 12 MLS Save of the Week awards – by far the most in MLS – and had four stops nominated for MLS Save of the Year. The Marietta, Ga., native was honored with a tifo reading “Player One: The Astonishing Joe Bendik” before the Lions’ match against Columbus on Sept. 17.

Selected with the second pick in the 2015 NWSL Expansion Draft, Harris returned to her home state to lead the Pride backline. On Tuesday, Harris was announced as the 2016 NWSL Goalkeeper of the Year after making 62 saves and posting a 1.33 goals against average in 15 appearances for Orlando. With a number of highlight-reel saves this season, Harris led the league with nine Save of the Week honors and accumulated four shutouts during Club’s inaugural campaign.

This award holds an honor all of its own. Voted on by fellow teammates, the Player’s Player of the Year is respected day-in and day-out for his or her performance, not just on game days; he or she is of utmost importance to the group, selfless, puts the team on his or her shoulders in adverse situations and defies expectations.

This award is given to the players who scored the most goals during the 2016 season for their respective teams.

Larin followed up a record-setting rookie campaign with an equally impressive sophomore season in MLS. The first-overall selection in the 2015 MLS SuperDraft, who took home Rookie of the Year honors after shattering the rookie goal-scoring record, again led the team with 14 goals and was named a 2016 All-Star.

Edmonds turned heads during her third NWSL season, having a breakout campaign with the expansion side. Acquired via trade with Western New York in Dec. 2015, the 29-year-old led the Pride with six goals, two of which were game winners. Edmonds’ efforts during Week 12 were honored with NWSL Goal of the Week after she scored two goals in the final three minutes to defeat Boston 2-1 on July 10.

The Coaches Award is given to a player who exemplifies team spirit, has a great attitude and work ethic, trains with intensity and is a positive presence in and around the locker room.

Carrasco joined City in July 2015 and quickly established himself in the starting XI. The steady defensive midfielder has featured in 30 games for the Lions, 21 of them starts, and was a leader on the team. The 28-year-old played in every game a but one under Lions’ Head Coach Jason Kreis.

After earning her first career start on May 28,  Pride goalkeeper Bledsoe had her 2016 season cut short after suffering a fractured fibula during training in June. Despite being placed on the season-ending injury list, Bledsoe remained a strong supporter for her team, attending Pride training sessions and matches during her rehabilitation. After an accelerated recovery, the Wake Forest product rejoined her team on the training pitch, pushing the team each day while beginning her 2017 preparations.

Da Silva was one of OCB head coach Anthony Pulis’ best weapons in 2016. The talented and quick winger led OCB with five assists to go with two goals in his first season as a professional. The 18-year-old is also a fixture on the U.S. U-19 national team.

This award is presented to the players who have made the biggest impact in the local community. Both winners used their background and success to inspire the youth of Orlando.

Alston, the 2013 MLS WORKS Comeback Player of the Year for returning to the pitch four months later after being diagnosed with chronic myelogenous leukemia (CML), was awarded the Dr. William Dameshek Award named in memory of the LLS icon for his notable work as a volunteer, advocate and spokesperson of the the Leukemia and Lymphoma Society (LLS) in Central Florida. Alston has also completed more charitable appearances than any other member of the first team, including frequent visits to bring cheer and good wishes to hospitalized children at Arnold Palmer Hospital for Children and speaking at schools about his background and life experiences

With an inspirational story of her own, Burkenroad quickly became one of the most recognized faces of the Pride in the Orlando community, attending fundraisers, visiting local hospitals and advocating in Central Florida. On Aug. 28, the 23-year-old California native was awarded the Voices of Courage Award by Orlando Mayor Buddy Dyer, recognized for her efforts with the #RethinkHomelessYouth campaign and for her work as a member of a local committee whose focus is on ending youth homelessness.

The President’s Award is selected and presented by club President Phil Rawlins. It is given to a person, inside the organization or out, that has gone above and beyond to help further the efforts of the club. This year’s winner has been present since the early days of the club and has volunteered at nearly every club event in that time.